Chris was one of the few people to have seen Jason Voorhees before the time when he had the opportunity to go on a mass killing spree and survived. While on vacation with her parents at Higgins Haven as a teenager, Chris and her parents got into a heated argument for arriving home late after a date with her boyfriend, Rick. The result was Christine's mother slapping her; something she had never done before. Hurt and wanting to punish her parents, Christine ran out of their summer home and into the woods.

Finding rest at the base of tree, she sat there a while and dozed off. Shortly after, Chris awoke to the sound of footsteps and looked behind her, thinking it was her father looking for her, but instead, Chris found herself looking at a hideous man with a knife, who gave chase to the girl. Chris managed to kick the knife out the man's hand and run away in fear, but the man kept pulling her down to the ground. She eventually lost consciousness. When she awakened the next day, Chris was in her own bed. For unknown reasons, her parents never mentioned anything to her about the attack or the attacker.

What Chris didn't remember was that she regained consciousness in the deformed man's hands and broke free of his grip. She ran until she crossed paths with the local doomsayer named Ralph, who noticed her terror of something. However, Chris did remember the hideous man's face and couldn't forget about it.

Years later, in the summer of 1984, Chris returned to Higgins Haven -- unbeknownst to her -- a day after the events of Friday the 13th, Part 2. This time, her friends, Shelly Finkelstein, Debbie Klein, Andy Beltrami, Vera Sanchez, Chili Jachson, and Chuck Garth, accompanied her. She revealed Andy and Debbie's unborn child, as Debbie said "That's what happens when you're pregnant and said "No way we're pregnant, remember?" to Andy when he was about to give her pot, and as a result Debbie revealed their child in a way. They arrived at her summer home where her boyfriend Rick was waiting, himself also with the group. Unknown to any of them, a wounded Jason Voorhees, who survived his first string of murders and his fight with Paul Holt and Ginny Field, had settled in the barn nearby to rest and heal. Later on, Christine told Ricky of what she remembered about the deformed man that attacked her that horrible night.

Later on, when Chris and Rick were alone in the cabin, it was too quiet. For a place filled with teenagers, this was strange. She and Ricky went searching for their friends. Chris searched the house she also searched outside where she stumbled on Loco's corpse hanging, she went back inside, only to have Rick's corpse fly through the window. Chris ran to his side and cried over him. She looked over to the window, where Jason (wearing his brand-new hockey mask for the first time ever) appeared with an axe. He had murdered Rick in cold blood earlier along with their friends and now he was stalking her. Chris ran into the barn and to the upstairs part, where Jason followed her. She was able to whack Jason's head with a shovel and knock him out. Taking the chance, she put a noose around Jason's neck and sent him out the barn window, hanging him. When Chris went down and opened the barn door, she was shocked to see Jason had survived the hanging. He lifted his hockey mask up to give himself more space to get the rope off his neck. His identity was revealed to be the man who attacked Chris before. Seeing the man's face again sent Chris into hysterics as Jason dropped from the rope and slid his mask back on.

As the utterly horrified Chris screams, Jason picks up a machete and closes in on her. Suddenly, Ali, another motorist and friend to the other two Jason had killed, comes running in and attacks Jason, only to have his hand chopped off and killed. With Jason busy hacking Ali to death, Chris is able to gain enough stability to pick up a nearby axe. When Jason turns around, Chris then sent the ax flying forward into Jason's head. He reeled back with a grunt and fell to the ground, apparently dead. Chris sighed in relief and headed to the lake. She got into a canoe and paddled to the middle of lake.

The next morning, Chris awakened to see an unmasked and living Jason looking at her through the window of the house menacingly smiling at her. After bursting down the door after staring at her, Jason begins to run towards her position. As she tries to paddle away before, she turn back realizing that Jason wasn't there believing it was just a hallucination. However, the decaying corpse of Jason's mother rose from the lake and dragged her down into the water. But this was all a bad dream after all and in reality, Chris was alright, but her mental state was highly questionable as she screamed and hysterically laughed while the police car she was in drove off. She was last seen in a room at Wessex county medical center crying and hugging her parents.

Chris Higgins was the first person (not including Ginny Field) to see Jason as an adult after his supposed death in the lake in 1957, and the second person to have ever survived an encounter with him. She was the second person to have battled/fought him with fierce offensive and defensive attacks that inflicted heavy damage on him and were enough to stop him, at least for a short while as he was found missing that same night. Her final axe blow to his head would be with him as a giant gash at least until the destruction of his original body.

An alternate ending had Ali surviving; Chris opens the door to find Jason, but is scared by Ali. They both get away. Soon after, the paramedics arrive, only to find Jason's body missing.[1]

Chris in Friday the 13th: The Game 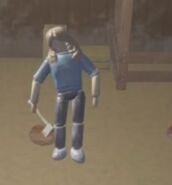 Chris in Friday the 13th: The Game 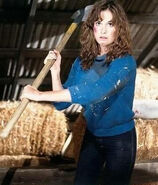 Retrieved from "https://fridaythe13th.fandom.com/wiki/Chris_Higgins?oldid=44763"
Community content is available under CC-BY-SA unless otherwise noted.