"The two greatest titans clash in a final showdown."
―Taglines

Freddy vs. Jason, is a 2003 American slasher movie. Directed by Ronny Yu, it is a crossover film combining two of the most successful horror franchises. It is also known as Friday the 13th Part XI and A Nightmare on Elm Street 8. In the series continuity of both franchises, this comes after Jason Goes to Hell: The Final Friday and Freddy's Dead: The Final Nightmare. The film would wind up being the highest grossing feature throughout the history of either character villain, and is the final film in the original series of both the Nightmare and Friday movies and in the original timeline. Afterward, the franchises returned as reboots/remakes in 2009's Friday the 13th and 2010's A Nightmare on Elm Street.

After four years, Freddy Krueger is trapped in Hell. The town of Springwood has forgotten about him, robbing him of his power. He finds Jason Voorhees, disguises himself as Jason's mother, Pamela Voorhees and brings him back to life, telling him to kill some people on Elm Street. If enough fear is spread by Jason, Freddy will come back.

Meanwhile, Jason goes to Lori Campbell's house (where Nancy and Jesse used to live) where Lori, Kia, Gibb, Blake, and Trey are. Trey is Gibb's boyfriend and Kia wants Lori and Blake to be together which Lori doesn't like. After a while, Jason kills Trey and the police think that Freddy was the one who killed him. One of them mentions Freddy's name while Lori and Blake both hear the name.

At the police station, Lori falls asleep and is stalked by Freddy, but he's not strong enough to kill her yet. When Freddy attempts to kill Blake in his dream, his claw goes right through him without harming him at all. When Blake wakes up, he finds his father got his head cut off. After that, Jason kills Blake as well.

All the kids who made contact with Freddy were placed in Westin Hills where they are given Hypnocil to prevent them from dreaming. Among them are Mark Davis and Lori's boyfriend Will Rollins. Will saw Lori's dad (which it was Freddy and Will did not know it was him at the time) kill Lori's mother.

When Will sees the report on TV that someone was murdered in Lori's house, he decides to escape so he can see if she's all right. Mark takes the keys from Max, a worker at the asylum, and they escape.

The next morning, the police blame the murders on Blake and say that he committed suicide after killing his father and Trey. Kia didn't believe them, and knows that they're lying. After Lori tells Kia and Gibb about her nightmare, Mark show up and tells Lori (and all the students) all about Freddy. Will comes and tells Mark to stop scaring Lori. Lori who is shocked from seeing Will passes out.

After the boys leave the school, Mark tells Will that Springwood covered up Freddy's existence and that everyone who made contact with him was locked up in Westin Hills, so no one else could get hurt or killed. At night, Mark realizes that he screwed up the town's plans by spreading enough fear about Freddy. At the Cornfield, Lori and the teenagers are having fun until Gibb falls asleep and is attacked by Freddy. Before Freddy can kill her, Jason kills her, along with a glowing raver who was going to rape Gibb in the real world.

Freddy realizes that Jason will keep on killing his children and is very angry. After Jason kills Gibb, the glowing raver, Shack, and several other teenagers, Lori, Will, Kia, Linderman, and Freeburg escape. After they leave the party and take the guys home, Will tells Lori the truth about how her father killed her mother (Or so he thought, because it was actually Freddy who did it). At first, Lori didn't believe him until she wants to find out the truth about her mother's death.

They arrive at Mark's house and witness Mark being killed by Freddy with fire and Freddy scratches Mark's face. And on Mark's back, it says, "Freddy's back!" Meanwhile, Deputy Stubbs finds Lori, Will, Kia, Linderman, and Freeburg and tells them about Jason's life. Lori falls asleep and meets Freddy. When she wakes up, she pulls a piece of Freddy's ear out of her dream with her into the real world. The guys know the truth: there are 2 killers and can get Freddy out of Lori's dream and pull him into the real world. Will mentions that he never had nightmares at Westin Hills and was taking Hypnocil. the guys discover that Hypnocil will prevent them from dreaming so Stubbs leads them to Westin Hills. So they can take Hypnocil to protect them from Freddy. In the power room, Freeburg was smoking marijuana and is tricked by Freddy who possesses Freeburg's body. In Freeburg's body, Freddy pours the Hypnocil down the drain before Stubbs and Linderman find him.

Jason comes and tries to attack them until he gets electrocuted by the computer station and pulls Stubbs into the electricity killing him in the process. The guys find that the Hypnocil is gone by finding all the empty bottles on the floor. Jason sees them through a window and throws Stubbs's body through the door. They panic and leave the room noticing Freeburg (Freddy in disguise) standing in the hallway with his hands behind his back. Jason comes storming toward him and Freeburg (Freddy) injects Jason with the 2 tranquilizer syringes he had behind his back. While doing so, Jason chops Freeburg in half and passes out from the tranquilizers.

Freddy attacks Jason in the dream world, but Jason finally understands he is being used and fights back against Freddy, who is unable to kill Jason, until he finds out that Jason's weakness is water (he's only scared of water in his deep subconscious). Meanwhile, Lori, Will, Kia, and Linderman take Jason to Camp Crystal Lake so he can fight Freddy and have a home field advantage. Lori is injected with tranquilizer so she can pull Freddy out of the dream world. She sees that Freddy has modified Jason's dream so it is back at the time when Jason was drowned, at age 11. Within the dream, the other children call him "freak show" and push him into the lake. Freddy tries to drown Jason until he wakes up just as Kia is about to give him mouth to mouth and causes the van to crash.

Fortunately, they are right at Camp Crystal Lake. With Jason awake, Freddy turns to Lori and reveals to her that he was the one who killed her mother through a dream sequence. While Freddy is attacking her and scratching her with his clawed glove, Will, Kia, and Linderman fight Jason at Camp Crystal Lake. Linderman is killed when Jason spikes him on the sharp edge of a shelf. Meanwhile, Will accidentally drops one of Lori's right hand falls into the fire started by Jason. She wakes up and pulls Freddy out of the dream world. Freddy and Jason engage in a bloody battle in the middle which Kia distracts Freddy and is killed by Jason. After Kia's death,

Lori stays to kill and beat Freddy for her revenge for her mother's death. Freddy appears to have the advantage over Jason, though he is the harder of the two to kill. Eventually, the villains knocked over to the docks by a mining cart and Jason hacks away at Freddy with his machete until Freddy cuts off Jason's fingers and takes his machete. Freddy slashes Jason with it and his claws, inflicting several injuries on him, including stabbing him in the eyes. During the fight, Lori sprays the docks with gasoline and throws some burning sticks onto the docks where the villains are at. Jason uses the distraction to impale Freddy with his arm and tears Freddy's right arm off.

Freddy, who has blood pouring from his mouth, manages to stab Jason with his machete while Lori and Will run and jump in the water. Several propane tanks explode from the fire Lori started, setting the villains on fire and sending them flying into the water. Camp Crystal Lake is destroyed in the process.

After the explosion, Will and Lori get out of the water and embrace for a moment only to see Freddy who survived the blast. Freddy tries to kill Lori and Will with Jason's machete until Jason came out of the water and stabs Freddy from behind with his own arm and falls into the lake. Meanwhile, Freddy drops Jason's machete and falls to his knees. Lori picks up Jason's machete and cuts Freddy's head off after Lori saying "Welcome to MY world, bitch.". Freddy's head and Freddy's body fall into the lake. Jason sinks below the surface as Lori watches on. Lori then throws Jason's machete into the lake and walks away with Will. The next morning, there is fog and it's very quiet. All of a sudden, Jason walks out of the lake carrying his machete in one hand and Freddy's severed head in the other. It seems that Jason defeated Freddy, until Freddy's head winks at the audience and laughs as the end credits begin to roll. 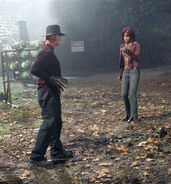 Add a photo to this gallery

Promotional Poster
Add a photo to this gallery

Freddy vs. Jason on the A Nightmare on Elm Street wiki.

Retrieved from "https://fridaythe13th.fandom.com/wiki/Freddy_vs._Jason?oldid=46541"
Community content is available under CC-BY-SA unless otherwise noted.