Friday the 13th: The Game

Friday the 13th: The Game is a survival horror game released on PC, Xbox One, and PlayStation 4. It was released on May 26th, 2017 for digital stores and the physical copies were released on October 13th, 2017. The game was released on Nintendo Switch on August 13, 2019.

Friday the 13th: The Game is a semi-open world third-person survival horror game set in the fictional camp of Crystal Lake in the Friday the 13th franchise. The time period in which the game is set is the mid-1980s in order to better capture the feel.

The game is an asymmetrical multiplayer video game, with up to eight people able to play in one game. One player controls Jason Voorhees, while the remaining players control camp counselors at Crystal Lake. A player may also control Tommy Jarvis, who becomes playable when certain conditions are met. According to gameplay demos, Jason has heightened hearing and vision, with him being able to teleport anywhere the player wants. The objective of the counselors is to escape from the camp or survive until time runs out on the session, while Jason's objective is to kill all the remaining players. Jason may also be defeated with an "‘epic’ win condition" that requires teamwork and is difficult to perform.

Kane Hodder, who portrayed Jason in Part VII, Part VIII, Jason Goes to Hell, and Jason X reprised him via motion capture and coordinated the stunts. Thom Mathews, who portrayed Tommy Jarvis in Part VI, and Larry Zerner, who played Shelley Finkelstein in Part III, also reprise their roles in the series.

Although the game was originally planned to be multiplayer only, a single-player mode will be added in an update planned for Summer 2017, despite the stretch goal for US$1.625 million to unlock it not being reached. The mode will consist of objective-based missions that will allow the player to take control of Jason against offline camp counselor bots. Some of the missions will be adaptations of the films, while others are original scenarios.

In the game, players can take control of a number of different characters. Players will either be a counselor or Jason.

Although Tommy is not technically a counselor, he is a special character in the game. All of Tommy's stats are 10/10 and he is the only one who can kill Jason. To get Tommy on the map, at least two counselors need to either die or escape and you need to use the CB radio to call him. Then one of the Dead/Escaped counselors will be brought back as Tommy Jarvis.

Additionally, there is one unplayable counselor, Rob Dier ("The First Victim") who is always killed in the opening cutscene and whose body can be found in random areas around the map is based on Rob Dier from The Final Chapter.

There are 9 different playable Jasons and Roy Burns to choose from. Parts 2, 3, 4, 6, 7, 8 & 9, as well as Roy Burns from Part 5 and Tom Savini's own Jason, created especially for the game. Uber Jason from Jason X has been announced in the Virtual Cabin 2.0 as a future playable character. Jason is able to interchange each weapon. Each Jason has his own strengths and weakness based on events depicted in the Friday the 13th movies:

Pamela Tapes: Tapes of Pamela Voorhees talking with the Crystal Lake Police, including the Police Chief Tom Kelley and Detective Joe Maddery, after Jason's supposed drowning. Malcolm Jarvis, Tommy's father, also appears on one of the tapes as the local doctor trying to calm Pamela down. The Pamela Tapes were written by Tom McLoughlin, who also wrote Friday the 13th Part VI: Jason Lives.

Tommy Tapes: The all-new Tommy Jarvis Tapes are ready to be found throughout Camp Crystal Lake! Discover an entirely new set of tapes that explore the world of Tommy Jarvis and how he deals with the unrelenting force of Jason Voorhees. Written by Adam Green (Creator of Hatchet, Digging Up the Marrow, Frozen) to create a new story focused on one of the few heroes of Friday the 13th!

The Grendel, based on the spaceship from Jason X was confirmed in the secret ending to the Virtual Cabin 2.0 however this was canceled due to a legal dispute which ended content creation for the game. 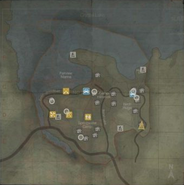 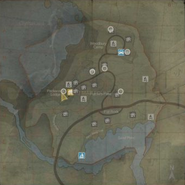 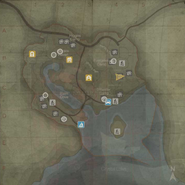 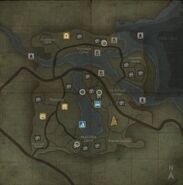 DLC Roadmap
Add a photo to this gallery

Retrieved from "https://fridaythe13th.fandom.com/wiki/Friday_the_13th:_The_Game?oldid=47483"
Community content is available under CC-BY-SA unless otherwise noted.