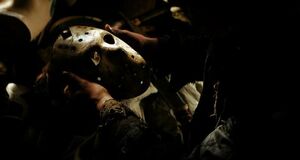 Introduced in Friday the 13th Part III, the Goaltender mask since then is the trademark icon of Camp Crystal Lake’s mass murderer, Jason Voorhees. A similar mask was once also worn by Roy Burns during his rampage to avenge the death of his son, Joey.

Before he acquired his Hockey Mask, Jason wore a burlap sack over his head with a single eyehole that was cut out on the left side. Jason lost that in his battle against Paul Holt and Ginny Field. Jason also wore a blue plaid button shirt with two pockets, dark blue overalls, and black farming boots.

After he survived his attack against Ginny and Paul, an unmasked and badly mauled Jason made his way to a grocery store that was owned by married couple, Harold and Edna. Upon entering the store, Jason stole a whole new set of clothes - a white undershirt, a pair of grey pants, a belt, and a dark green 2-pocket Big Mac worker shirt -, and wore them out before he discarded his previous clothes (except for the farming boots). He then killed both store owners right before.

The next evening, Jason stole a Detroit Red Wings hockey mask from Sheldon Finkelstein, which had a red arrowhead triangle between the eyes and two red triangles on either side of the nose (the triangles were technically called "chevrons"), that both pointed in upward diagonally towards the eye holes. The mask later gets a diagonal crack above the left eye hole from an axe wound caused by Christine Higgins.

Friday the 13th: The Final Chapter

The only differences from Part 3 with that mask was that the blood that flowed from the axe crack was more pronounced, as well as half of the top arrowhead triangle was scuffed off and the other two "lower triangles" were both there, but were faded and weren't as visible.

Friday the 13th: A New Beginning

Roy's Mask looked exactly like the mask in Part 3 (before the axe mark), except that it had a more circular shape, had no arrowhead top chevron and only two blue chevrons - which were larger and pointed towards the middle of the mask just under the nose.

The hockey mask was pretty dirty with the crack from the axe in Part 3. It also had only the top red arrowhead triangle - which was darker in color and more triangular than before.

Jason's Mask seemed a bit more whiter than before with the top triangle that looked even darker than in Part 6. Also, the mask had a small part that was cracked off at the bottom left corner (which partially exposed Jason's mouth on that same side), due to Megan Garris hitting Jason's face with a boat propeller in Part 6. The mask was eventually destroyed by Tina Shepard.

This is no longer the mask that Jason stole from Part III, as it was previously destroyed. Jason steals this mask from Jim Miller who was wearing it as a prank. The hockey mask had an ovoid shape, yellow color tone, and was much wider. For reasons unknown it also has a crack similar to the axe wound on Jason's previous mask, albeit narrower. The mechanism that was used to attach the elastic straps was based on D-shaped iron ringlets. Perhaps the most visible and different feature that made that mask different from the others was that the two bottom red triangles were thinner and their direction was reversed to point diagonally out past the eye holes.

Jason's Mask seemed to be very damaged, displayed the large crack from Part 7, as well as the axe cut from Part 3 and all other assorted damages. The paint job also consisted solely of a dark red arrowhead triangle at the top. The mask seemed to be fused to Jason's head, but loosened off his face when he got dragged down to Hell at the end of the film.

The producers decided to change Jason's Mask entirely. The shape of the mask was reminiscent of Part 3, complete with the three original red chevrons, but not the axe crack. The only real difference was that the weathering on the mask gave it more of a cream color than an actual white. Leathery black straps were also used and extra air holes where the snaps are.

Jason's mask was perhaps the most visually different in the sense that it was very angular and lacked the round nose that was seen on other masks' before it. That mask had a single red triangle at the top and also had the axe crack from Part 3 as well as the lower crack from Part 7, but was much more subtle.

The mask that Über Jason wore was made of a metallic alloy and actually conformed around his face. The holes on it were also positioned differently, which gave it an organic look.

Jason got his hockey mask after Donnie tore off his burlap sack and the exposure caused an enraged Jason to kill him. When Jason bent over to retrieve the burlap sack, he found a Detroit Red Wings hockey mask inside a nearby crate, tried it on, and looked in the mirror (in an alternate scene, Donnie wore the mask while he read a porn magazine, and, when Jason came downstairs with stolen kerosene, he then chopped off Donnie's head and took the mask). The mask itself looked just like the one in Part 3, although in a more dirty and worn-out look, which gave it more of a pale cream color and the red triangles were slightly faded.