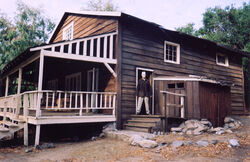 Mr. and Mrs. Higgins owned the ranch of Higgins Haven. Their daughter Chris Higgins would often visit their home on the shore of Crystal Lake. Every year, Mr. Higgins would vow to buy a horse, and every year he would buy plenty of hay with which to stock the barn but never a horse.

In the summer of 1982, Chris returned to the house very late after spending the day with her boyfriend Rick. Her parents immediately began yelling at her and Mrs. Higgins slapped her daughter in the face. Chris fled from the house and fell asleep in the woods, before being attacked by backwoods killer Jason Voorhees. Chris awoke the next morning in her bed back at the house, with no memory of how she had escaped. Her parents never spoke of the incident.

None of the Higgins family visited the house for two years following Chris' attack. However, Chris and a group of her friends, including Andy, Debbie, Chuck, Chili, Shelly Finkelstein and Vera Sanchez returned to Higgins Haven in June of 1984, in an attempt for Chris to conquer her fears surrounding the place. The group of friends did not know that Jason Voorhees had taken refuge in the barn to rest after his confrontation with Ginny Field and Paul Holt.

When the seven young people arrived at the house, they were met by Rick, and the group began their relaxing country weekend. After Shelly annoyed the group at large by faking his own death, he accompanied Vera to town to buy some groceries. During the trip, they accidentally upset a group of bikers including Loco, Ali and Fox. The bikers followed Shelly and Vera back to Higgins Haven to get revenge by siphoning the gas out of Chris' van. One by one, all three bikers ventured into the barn and were murdered by Jason in cold blood, except for Ali, who was gravely wounded and left for dead.

At nightfall, Shelly entered the barn and was attacked by Jason, who stole his hockey mask and spear gun before going onto the dock and murdering Vera. The killer entered the house and killed Andy, Debbie, Chuck and Chili, then waited for Chris and Rick to return from their walk. Upon their return, Jason murdered Rick and began pursuing Chris. After a lengthy chase and wounding Jason several times, Chris was trapped in the barn with the killer. Ali alive just before Chris was to be murdered and was killed as he attacked Jason, giving Chris enough time to pick up an axe and swing it into Jason's forehead. The killer fell over, seemingly dead, and Chris escaped onto the lake in a rowboat.

The crime scene at Higgins Haven was discovered the following day. Chris was found in an unstable state and led away as she ranted about being attacked by a "lady in the lake".[1]

It took until nightfall for investigators to recover the corpses of Shelly, Chuck, Debbie, Chili, Fox, and Loco, the eye and one-eyed corpses of Rick and his eye because Jason caused it to come out and Vera but not her eye because it was destroyed by the harpoon, the upper and lower parts of Andy, and the hand and one-handed corpse of Ali, all pieces of evidence and the apparent corpse of Jason and took the corpses and Jason, still alive (either unconscious or pretending to be dead), to the Wessex County Morgue[2]

Retrieved from "https://fridaythe13th.fandom.com/wiki/Higgins_Haven?oldid=36278"
Community content is available under CC-BY-SA unless otherwise noted.