Axed in the head by Jason Voorhees

Melissa was a spoiled rich girl. Melissa is crude, shallow, manipulative, and vindictive to anyone she sees as a threat. It's obvious in the beginning that she has her sights set on Nick Rogers, but Nick has no desire to be with Melissa and barely puts up with her terrible behavior.

When he begins to show interest in Tina Shepard, Melissa tries desperately to try anything to pick at her. When she overhears that Tina was in a mental asylum (due to the trauma of her father's death), she coaxes their friend Eddie McCarlo to dress up like a mental patient. This rude insulting behavior momentarily angered Tina and caused her to lash out at her using her barely controlled telekinetic powers, destroying Melissa's pearl necklace. Her efforts only backfire as Nick was disgusted by her behavior to Tina.

She seduced Eddie in an attempt to make Nick jealous. When nothing happens, she kicks him out of the room not knowing their friends were being killed one by one by Jason Voorhees. At some point, she leaves the cabin and ventures off to Tina's to find Nick, but eventually returns to the cabin. Nick and Tina then arrive. While Nick is trying to comfort Tina, Melissa decides she's had enough and wants to leave. Nick tries to convince Melissa to stay with him and Tina, but fails.

Melissa was killed almost immediately by Jason with an axe in the face when she opens the door to leave as he was waiting just outside. She was then thrown behind the TV in front of Tina and Nick, leaving them horrified.

She is Jason Voorhees' 68th victim. 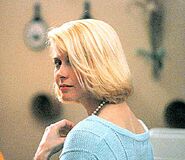 Melissa spying on Tina And Nick.

Melissa tells Eddie her betrayal to him.

Melissa ignores the warnings of Tina and Nick on Jason and decides to leave home.

Melissa in her encounter with Jason knowing she will die.

Melissa's death at the hands of Jason Voorhees.
Add a photo to this gallery

Retrieved from "https://fridaythe13th.fandom.com/wiki/Melissa_Paur?oldid=46570"
Community content is available under CC-BY-SA unless otherwise noted.