Friday the 13th Wiki
Register
Don't have an account?
Sign In
Advertisement
in: Male victims, Characters in Friday the 13th: A New Beginning, Killers,
and 25 more

Impaled on the spikes of a tractor harrow

Roy Burns is the main antagonist in the film Friday the 13th: A New Beginning. He was a soft-spoken loner and paramedic who was partnered with his colleague Duke Johnson.

Roy Burns, also known as Pseudo Jason/Impostor Jason (after his death) learned of the death of his son Joey Burns, who was a resident at Pinehurst Youth Development Center. Roy loses his mind and dons a hockey mask to impersonate long-time dead killer Jason Voorhees, going on a revenge killing spree to avenge his son's death (much like Pamela Voorhees in the original film), killing almost all of the Pinehurst residents and staff along with a few other people unrelated to the incident.

Roy has been a controversial figure among the Friday the 13th community. Created after Jason's death in The Final Chapter after Paramount decided to continue the series due to the film's unexpected success, he was ultimately a catalyst to set up Tommy Jarvis as the new Jason, a move that became highly unpopular and was ultimately scrapped in favor of bringing Jason back into the series.

In more recent times, Roy has gained somewhat of a cult following along with merchandise such as prop replica masks, action figures, a pop vinyl figure and not one, but two video game appearances. In 2015 Roy was included as an alternate skin for the Jason DLC character in Mortal Kombat X, and in 2018 Roy became a playable killer in Friday the 13th: The Game in a free update.

At some point in his life, Roy was in an intimate relationship with an unknown woman, whom he impregnated. While giving birth to her and Roy's son Joey, Roy's lover died and Roy, presumably unable to cope with this loss and the responsibility of raising a child on his own, abandoned Joey reluctantly, letting him be shunted from foster home to foster home. Roy would keep tabs on him, carrying around pictures of the boy in his wallet. The relationship between Roy and Joey remained largely unacknowledged by many, including the authorities and Dr. Matthew Letter, director of the Pinehurst Youth Development Center where Joey wound up after living in various homes.[1]

Roy and his partner Duke, in 1989, are called to Pinehurst after an incident there, resident Victor Faden having murdered another halfway house resident by mutilating them with an ax during an argument. There to retrieve the body, Roy discovers it is Joey and, upon seeing his son's butchered remains, goes into shock, only to be brought back to his senses by Duke's remarks, who he reluctantly helps move Joey's dismembered body.[1]

Joey's murder causes Roy to snap and, much like Pamela Voorhees before him, he begins irrationally blaming others for the death of his son (Yet ironically, he didn't go after Victor, because he's incarcerated). Acquiring a hockey mask, spruce green coveralls, and various weapons, Roy goes on a killing spree while dressed as the recently deceased mass murderer Jason Voorhees, his first victims were a pair of greasers by the name of Vinnie Manalo and Pete Linley, who Roy kills on a deserted road after they experience car trouble. A day after killing the greasers, Roy would kill again, murdering orderly Billy Macauley and his girlfriend Lana Ardsley in a diner parking lot with an ax. The sheer brutality and randomness of these murders cause the local authorities to fear Jason had somehow come back.[1]

With the police scrambling to find out what was going on, Roy's body count rises rapidly, with him killing drifter Raymond Joffroy, and Pinehurst residents Eddie Kelso and Tina McCarthy in broad daylight in the woods near the Hubbard farm. Roy would next kill Pinehurst employees Dr. Matthew Letter and George Winter in the woods, before moving on to a trailer park and killing a woman named Anita Robb and her boyfriend Demon Winter there. After the double homicide in the trailer park Roy, on his way to Pinehurst, murders the halfway house's neighbors Junior and Ethel Hubbard with a meat cleaver.[1]

After killing off the Hubbards, Roy sneaks into Pinehurst and kills the residents still there, Jake Patterson, Robin Brown, and Violet Moraine, afterward stuffing the trio's corpses in the room of new halfway house resident Tommy Jarvis. When Pinehurst assistant director Pam Roberts and her friend Reggie Winter return to the halfway house and discover their friends dead, they try to escape and after Reggie falls, Roy bursts into the room and attacks them. Chasing Pam and Reggie out of Pinehurst and into the woods, Roy ambushes them at his abandoned ambulance (which contains the slain Duke) and follows Pam (Reggie having taken off elsewhere) back to Pinehurst and then to the nearby barn. As he prepares to strike down Pam with his machete, Roy is briefly incapacitated when Reggie rams him with a tractor.

Recovering from Reggie's attack, Roy springs to life and grabs at Reggie, Pam retaliating by kicking him in the head. Roy stumbles to his feet and chases Reggie and Pam into a barn, where he searches for the pair after they hide from him.[1]

While stalking about, Pam emerges from a storage shed with a chainsaw. After a scuffle, she manages to slash his shoulder open, but before Pam can finish him off, the chainsaw runs out of gas. Pam throws the saw at him and flees from Roy, but the killer is distracted when Tommy appears. Moving in on this new arrival, who can only stare dumbstruck at what he believes to be a resurrected Jason (his worst fear) who he killed five years ago himself, Roy injures Tommy with his machete but is in turn wounded when Tommy stabs him in the thigh with a knife. Chasing Tommy, Pam, and Reggie up into the rafters of the barn, Roy spots Reggie hiding behind a hay bale, but Pam leaps in to defend him. While fighting Pam, Roy is knocked out a nearby window by Reggie, positioned over a tractor harrow. Managing to grab onto the window ledge, Roy is left dangling, grabbing Reggie and trying to claw his way back up. Tommy uses Roy's machete against him, striking him in the wrist and nearly cleaving his handoff. Roy loses his grip and falls. Impaled in multiple places by the spikes of the tractor, Roy's hockey mask and facial prosthetic are knocked askew, revealing his true identity and Tommy realizes that the killer wasn't Jason after all.[1]

Sheriff Cal Tucker would later discover Roy's wallet and the pictures it contained and pieced together what motivated him to kill. Additionally, Roy's mask falls into the hands of Tommy.[1]

The FBI's official stance is that Roy was Jason's only legitimate copycat killer [2], though occasionally local law enforcement agencies and the media would wrongly attribute murders actually committed by Jason (including the Manhattan and Springwood killings) to copycats though people managed to convince them that they (except Roy Burns) were not copycats. [3] 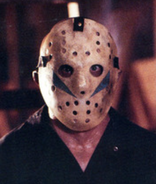 A close up of Roy in the barn scene.

Roy holding his own against a chainsaw wielding Pam. 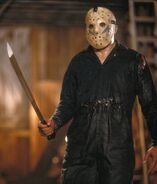 Roy as seen in the barn scene.

A side view of Roy, showing of the colors of his mask. 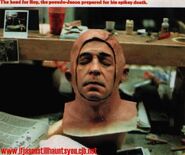 Roy as he appears in Friday the 13th: The Game 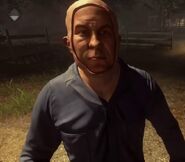 Roy unmasked in Friday the 13th: The Game resembling the likeness of Dick Wieand.

Impaled on the spikes of a tractor harrow, Roy's true identity is revealed.