She is the 5th victim of Jason Voorhees (although the cause of her death is still unknown).

After a campfire in which Paul tells the story of Jason Voorhees and the nearby Camp Crystal Lake, Terry and the other in-training counselors party in the main cabin of Packanack Lodge. When Scott asks her to dance, Terry politely refuses, prompting Scott to grab Muffin and begin to dance around with her to make Terry laugh, which he succeeds at doing. Muffin soon grows agitated after glimpsing Jason Voorhees out a window and is put down by Scott before scurrying back to Terry. The next day, during a jog, Terry loses track of Muffin, who takes off into the woods.[1]

Hours after Muffin's disappearance Paul Holt, his assistant Ginny Field, and several others go into town for one last night of fun, with Terry and several others electing to stay behind. When Paul and the others leave Terry goes skinny dipping in Crystal Lake, leaving her clothes by the shore, where they are taken by Scott. After wading through the water a bit Terry returns to dry land and finds her clothes gone. When Scott reveals himself Terry is given some of clothes back piece by piece by the taunting Scott, who ends up setting off a snare trap, which leaves him dangling from a tree. Begged by Scott for help, Terry, after getting the rest of her clothes and berating Scott by saying she should just leave him hanging for all the pranks he has pulled, goes off to get a knife to cut Scott down after he promises to stop with all his jokes.[1]

Going to her cabin Terry finds a knife and returns to Scott, who she finds dead, his throat having been slit by Jason Voorhees. Fleeing in terror from Scott's dangling corpse Terry runs into Jason, who kills her. He then takes her body to his decrepit home, where it is placed alongside the bodies of Winslow and Alice around a shrine dedicated to the head of Pamela Voorhees.[1] Also noteworthy: unlike the other victims, Terry's body was not found by authorities and could forever remain in the shack along with Pamela's head and the bodies of Alice and Winslow. There is a goof in the 3rd movie when a newsman said 8 corpses.

Twenty-five years after her murder, Terry's body would be discovered in Jason's shack by Glo, Trick and Z-Moll, a trio of teenaged Goths who had become lost while searching for Camp Crystal Lake. Shortly after finding Terry’s body, Glo and Trick contact the authorities, who later find the shack and move Terry's corpse, and the others, out of it.[2] However, the events are non canon to the original series.

Terry's was the only one of Paul's murdered staff to be brought to Jason's shack and placed at the shrine. The only people at the time of her murder who knew where her body was were Paul and Ginny and would have been the only ones who could prove she was actually dead, but as Paul disappeared after Jason attacked the lodge, only Ginny was left to know the truth. Unfortunately, the police found no shack, but her account was believed. In real life, Terry is considered a fan favorite in the Friday the 13th community. 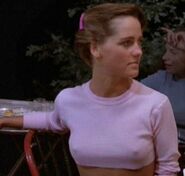 Terry looking for something or someone

Retrieved from "https://fridaythe13th.fandom.com/wiki/Terry_McCarthy?oldid=46954"
Community content is available under CC-BY-SA unless otherwise noted.