Trent Sutton is the tertiary antagonist of the Friday the 13th reboot, in which he is portrayed by Travis Van Winkle.

Trent Sutton was a privileged college student whose family came from great wealth. In the summer of 2008, Trent invited his girlfriend Jenna as well as several of his college friends (Bree, Nolan, Chelsea, Chewie and Lawrence) for a weekend of partying at his parents' spacious summer home.

During the drive, they stopped at a gas station to stock up on supplies and Trent had a minor altercation with a man named Clay Miller. Clay had been in the area passing out missing persons' flyers relating to his sister Whitney, who had gone missing in the area six weeks prior.

While Clay tried to talk with the gas station attendant, Trent rudely interrupted him, indicating that he was holding everyone up. The two exchanged brief words and parted company.

Trent brought the others to the house, but he had little interest in socializing with them and engaging in their drinking games. He only wanted to impress them with his obvious wealth and chastised them for their behavior.

He offered to go hiking with Jenna, but the girl quickly realized that this was just a transparent attempt to seduce her and she politely declined. She told Trent that he should try to be nicer to their friends.

As a show of good faith, he let Nolan and Chelsea take his truck down to the boat house. When Jenna was out of earshot however, Trent warned Nolan that no one was allowed to drive his boat (a rule that Nolan was only too willing to disobey).

Later, Clay Miller turned up at the house as he continued to pass out flyers. He didn't realize that the house belonged to the same people whom he had seen earlier at the gas station.

Trent and Clay exchanged words once again and he made it very clear that Clay was not welcome in his home. Jenna took pity on Clay and elected to accompany him on his search for his sister. As Jenna left, Bree with lustful eyes offered Trent a beer.

Trent attempted to entertain the others at the house, but refused to partake in their juvenile antics.

As time passed, Trent grew frustrated that Jenna had yet to return and suspected that she was cheating on him with Clay. To get back at her, Trent let Jenna's best friend Bree lead him upstairs where she stripped both of them of their clothes and started to engage in wild, unprotected sex.

As Bree videotaped their sexual encounter, Trent who suspected Bree of possible blackmail warned her of the sex tape going on the Internet. When they were through, Trent found that Jenna had returned to the house with Clay.

They tried to warn him that a masked murderer named Jason Voorhees was stalking the area, but Trent was more concerned with bad-mouthing Clay than he was with any potential danger that might be in the area. Jenna prevented the two from coming to blows with one another.

When the group heard the tortured screams of their friend Lawrence being murdered outside, Trent tried to telephone the police. He soon realized that the lines had been cut. As it turned out, a police officer named Bracke came to the house, but Voorhees appeared and promptly murdered him.

As panic consumed the group, Trent found his father's gun and loaded it with bullets. As he continued to hear noises throughout the house, he began shooting wildly until Clay forced him to calm down.

Trent went upstairs where he found Bree's dead body lying on the floor. Now that they realized that Jason had access to the house, they tried to leave.

Trent went into Officer Bracke's car to use the radio, but was startled when Bree's body came crashing down onto the windshield. While Clay and Jenna ran off in one direction, Trent squealed and took off down a narrow road.

As he stumbled down the street, a passing tow truck caught sight of him and stopped. The driver motioned for Trent to come over to the vehicle, but before he could react, Jason appeared from behind and ran him through with his machete.

He then impaled Trent on a row of spikes sticking up from the back of the truck. The driver frantically gunned the engine and Trent's bleeding body bounced around as the vehicle drove off. 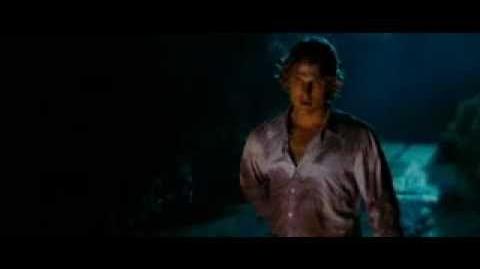 Retrieved from "https://fridaythe13th.fandom.com/wiki/Trent_Sutton?oldid=41806"
Community content is available under CC-BY-SA unless otherwise noted.